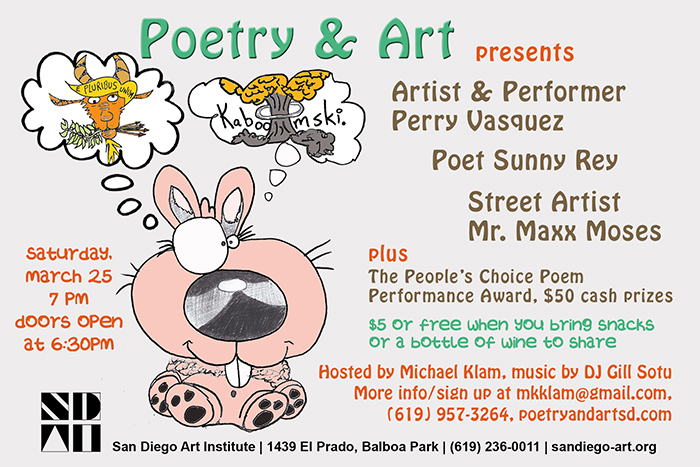 Perry Vasquez is an American-born interdisciplinary artist. He received his BA degree in Political Science and Studio Art from Stanford University and his MFA in Painting and Criticism from UCSD. His work focuses on the historical, social and cultural structures that underlie the U.S./Mexico border region as well as the evolving relationship between the European-American and indigenous American experiences.

Sunny Rey is a poet and activist with her first collection, Quotes and Poems by a Nobody, published in 2013 by Garden Oak Press. Her second collection, titled ROT, was published in 2016, also by Garden Oak Press. Her latest collection features 76 poems set out over seven sections and features the art of Clayton Llewellyn on the cover and throughout. Llewellyn earned a BFA from San Diego State and an MFA from the San Francisco Art Institute. He has made a career as an art professor and tattoo artist in and around San Diego. His art is primarily drawing, focusing on the periphery of human progress, glorifying the grotesque, observing the abandoned and elevating the absurd. 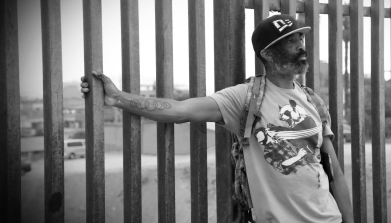 Mr. Maxx Moses, aka Pose2, transforms blank walls into contrasting ideas of beauty, ultimately to create a deeper understanding of the relationship between our physical identities and the energy behind this substance, spirit. Recognizing that real beauty and power is generated from the inside out, Maxx Moses created his new book, Say Word, to bring positivity and creativity into the hearts and minds of our communities. The book of art and affirmation sends a message that words and images can propel lives toward goodness and real self-empowerment. It’s a natural extension of the message that comes through the artist’s murals, workshops and activism.

The People’s Choice Poem Performance Awards – Participants read/perform one poem under three minutes long. Audience members choose (by secret ballot) their favorite poem based on content and performance. Props, artwork, singing, music, dancing, all accompaniment is allowed and anything goes. Top poem performances (the poems that receive the most votes) win $50. Audience members will be encouraged to hoot for their favorites and try to influence the rest of the audience.

Writers/artists who would like to participate in the People’s Choice Poem Performance Awards can get their names in the hat ahead of time at mkklam@gmail.com or text 619-957-3264.  It is a good idea to sign up early by email or text message as space and time are limited!