Congratulations to the San Diego Slam Team — Chrissy Croft, Rudy Francisco, Natasha Hooper, Javon Johnson, and Viet Mai — for winning the 2017 National Poetry Slam!  Check out more at NPS Facebook and at SOCIOPOETIX. Chrissy, Rudy and Viet Mai are all former winners of Poetry & Art’s 3 for $300 slam and People’s Choice at SDAI!

Many thanks to California Poet Laureate Dana Gioia for including us in his San Diego Central Library visit in July. He recited poems, signed books and discussed everything from literary criticism to marriage to the importance of slam poetry. I had a chance to talk to the audience about poetry in San Diego. Here is a photo and link to more from the event: 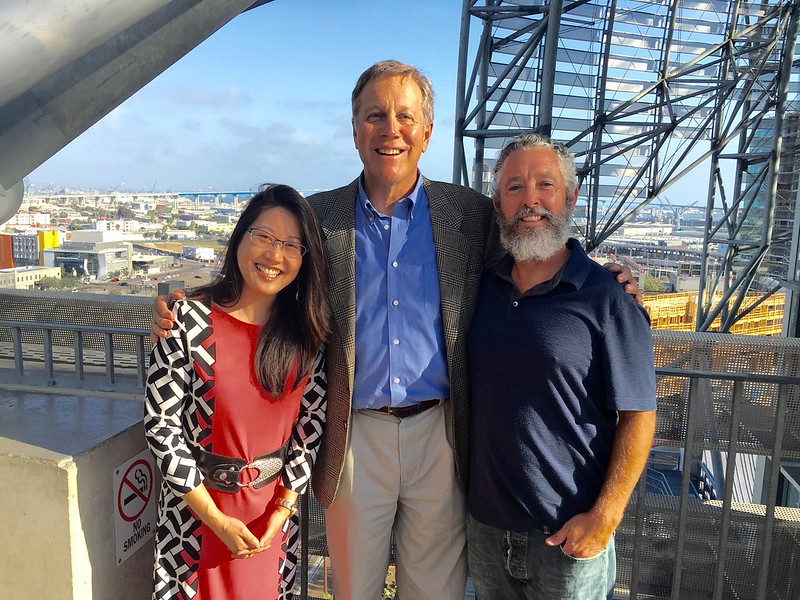 Publish your work! Check submission guidelines for the San Diego Poetry Annual and the Steve Kowit Poetry Prize. Deadline for both is October 15. Any questions and/or submissions can be sent directly to me at mkklam@gmail.com.

Get some Palabra with host Ted Washington at La Bodega Gallery.

On Friday, Nov. 10, Poetry & Art Series 2017 presents authors Tomas Gayton, Jim Moreno and Chris Vannoy. People’s Choice Poem Performance Awards follow featured readings and performances. This interactive arts and culture experience will include beverages, snacks and plenty of time to mingle. Doors open at 6:30 p.m., and the show starts at 7 p.m. Members are free, nonmembers $5 at the door. Bring a snack or beverage to share and get in free.  The event takes place in the San Diego Art Institute, 1439 El Prado, Balboa Park.

Tomás Gayton was born and raised in Seattle, Washington, the grandson of African American pioneers. Tomás is a retired civil rights attorney/activist. His poetry has appeared in Poets West, The Seattle Review, Vision Magazine, The San Diego Reader, City Works, African American Review, and The San Diego Poetry Annual. His most recent volume of poetry and prose is Sojourn on the Bohemian Highway, published by Poetic Matrix. His memoir, Long Journey Home, is also available through the Amazon Kindle Store. Other works include: Vientos de Cambio/Winds of Change, Yazoo City Blues, Time of the Poet, Dark Symphony in Duet with the late Sarah Fabio, and Two Races, One Face with John Peterson.

City Heights poet Jim Moreno is a Vietnam veteran against war, racism and violence. He is the author of Dancing In Dissent: Poetry For Activism (Dolphin Calling Press, 2007) and two CDs of poetry and music. Jim is a regional editor of the San Diego Poetry Annual and teaches at San Diego Writers, Ink, and Arts 4 Learning.  He is the coordinator of the ReEvolutionary Poets Brigade and the host of 2nd Tuesday Jihmye Poetry Open Mic at the Cafe Cabaret in Normal Heights.

San Diego poet Chris Vannoy is an editor, teacher, and tireless advocate of words
both heard and spoken. He is the originator of the Poet’s Tree featured and open reading series, as well as editor of the Poet’s Tree Press. He has published work in Ghosts of the Beatnik Poets, City Works, The Writing Center, Tokes anthologies, Visions and Step Jazz magazines. Vannoy participated in Quincy Troupe’s Artist’s on the Cutting Edge series in San Diego, Lollapalooza Spoken Word Tent, Border Voices Poetry in the Park and Tearing the Curtain 3.  He was one of 25 San Diego Poets featured in the Exploded Views CD and two CDs from the San Diego-based group Wormhole. His recent books published by Baxter Daniels Ink Press are:  A Strange Summer (2014), where much of his performance poetry is compiled, and The Rest of It, released earlier this year.

People’s Choice details
Participants in the People’s Choice Poem Performance Awards read/perform one poem under three minutes long. Audience members choose (by secret ballot) their favorite poem based on content and performance. Props, artwork, singing, music, dancing, and all accompaniment is allowed and anything goes. Top poem performances (the poems that receive the most votes) win $50.

Audience members are encouraged to hoot for their favorites and try to influence the rest of the audience. Writers/artists who would like to participate in the People’s Choice Poem Performance Awards can get their names in the hat ahead of time at mkklam@gmail.com or text 619-957- 3264. It is a good idea to sign up early by email or text message, as space and time are limited!